Chiropractic
Why teens should sit up straight
February 8, 2018 chiro 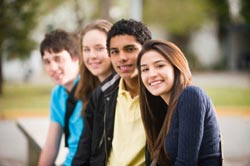 How many times did you hear, “sit up straight!” as a child? How many times have you said this to your own child? There’s  a reason behind that famous advice: poor posture early in life may lead to a number of back problems and pain later on. That’s why researchers conducted a study to better understand slouching in adolescents.

Researchers had 1,5092 adolescents complete questionnaires about their lifestyle and experience with back pain. Their sitting posture,  body mass index (BMI), and back-muscle endurance were also measured. Researchers discovered that boys were much more likely than girls to slouch. Watching TV, having a higher BMI, and having lower self-efficacy also increased a teen’s likelihood of slouching.

Teens who slouched also tended to have lower back-muscle endurance and non-neutral standing position. Some teens noticed their back pain increased while sitting, and those teens often had poorer scores on a child-behavior test.

These findings suggest that whether or not a child slouches isn’t simply about whether they remember to sit up straight. Encouraging healthy lifestyle habits and a strong self-esteem could also play a big role in helping your teen develop good posture. A doctor of chiropractic can evaluate your child’s sitting and standing posture to help them avoid future back pain.